On its website, Resorts World Sentosa (RWS) advertises that Malaysians who are Gold card members enjoy free bus rides between RWS and 15 cities in Johore, the southernmost state of Malaysia, on specific days of the week (Table 1). The Gold “Genting Reward” card is a membership that caters specifically to those who gamble, which is different from the generic “Invites” card where points can be earnt outside the casino. Based on this schedule, the buses generally run once or twice a week and are operated by various private companies with established services between the two countries. Singapore-bound buses leave in the morning while Malaysia-bound buses leave RWS in the late afternoon or evening. Considering that each route may take anywhere from 3-6 hours, this means that Malaysian customers who use these services travel during the day and gamble through the night at RWS. Most of these cities are mid-income cities, and a handful are notable for having a large Chinese population (such as Batu Pahat and Yong Peng). 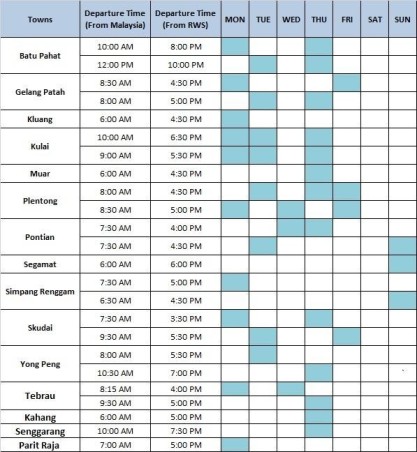 Connections between RWS and Malaysia as advertised by RWS. Shaded boxes mark the days of the week where Gold card members can travel for free. Source: https://www.rwsentosa.com/en/promotions/malaysia/malaysia-bus-services (accessed on Dec 2019)

However, by 2019, this network has changed. Though there are still bus services connecting RWS to various cities in Malaysia, many of these services are no longer reserved or free for RWS members.  The number of services where Gold card members can travel for free had declined by half, and services to four cities had been discontinued. Of all the different companies that bring Malaysians to RWS, only one (Segamat Travel) maintains a members-only service while the rest cater to both members and the general public. Indeed, after realizing that that the information given on the RWS website was outdated, we were only able to locate these bus services by calling the companies and their various offices directly. Often a local office would tell us to call another office to confirm whether or not such a service exists. It seems that one would have to know from sources other than RWS on how to purchase the tickets and when the boarding times are. Or one would have to be a seasoned Gold Card member.

At the basement car-park, this network appears to shift again. There are several booths where customers can purchase tickets to Malaysia (Fig. 1). However, only two bus companies – Coachliner 707 and Transtar – maintain these booths, and several booths have become vacant. What is advertised in these booths is different from what is advertised on the official website. For example, Coachliner 707 was supposed to provide services to six different cities in the state of Johor – Kulai, Plentong, Pontian, Simpang Renggang, Skudai and Tebrau. But at the booth, there are only services to specific locations within the city of Johor Bahru – Tun Aminah, Johor Bahru CIQ[1], Sri Putri and Merlin tower. At another booth, one can purchase tickets for bus service TS8, which runs between Johor Bahru CIQ and RWS with various stops along the way. This is a one-way express service in that passengers are not allowed to alight along the route when the bus is travelling from RWS to Johor Bahru, and are not allowed to board along the route when the bus is travelling in the opposite direction. RWS has become a terminal point for Singapore-Johor buses that bring Malaysians in and out of Singapore.

Fig. 2b: Waiting area at the basement car-park of RWS for Johore-bound buses

The map (Fig. 2) that emerges cannot be an exhaustive picture of the connections between Singapore and Malaysia. Rather, it is a fragment of a fugitive geography that is legible only to the bus industry and Malaysians who use these services regularly. The tidy map of bus services on the RWS website masks these overlapping and shifting lines that are only revealed by tracing their tracks on the ground. Their indeterminacy suggests that the infrastructure of extraction between the two territories has dispersed into the hands of private companies rather than being managed by RWS. That this map is obscured from the perspective of Singapore is primarily because the bus services are targeted at Malaysians, and casino-specific promotions are illegal in Singapore. Like TS8 which works as a one-way express service, the partial map generated so far is a one-way mirror – largely invisible to Singaporeans, but lucid to Malaysians. What if we try to draw this map from the perspective of Malaysia? Immediately, it appears that the decline in the number of free rides between Singapore and Malaysia does not mean that cross-border extraction of wealth has diminished. There has been reports in Malaysia on the phenomenon of “gambling buses” (赌巴) since the opening of RWS in 2010. Coachliner 707 was the first to provide tour packages to RWS which included $100 worth of complimentary chips. At its peak, the operator claimed to maintain a fleet of 200 buses traversing as far north as Malacca. Other “gambling buses” provided free travel and food vouchers with a similar condition that passengers had to purchase at least $100 of chips. By 2016, independent “gambling bus” promoters had begun to charge a nominal fee of $5-10 ringgit to recover increasing costs, which suggests increasing competition between promoters. A journalist who took one of these “gambling buses” noticed that most of the commuters were between 45-60 years old, and women represented the majority. A gambling addiction counselling centre in Johore stated in a report that of the 150 cases it handled in 2015, 38% involved gambling in Singapore casinos. It estimated that there were 200 “gambling buses” travelling between Malaysia and Singapore every day, of which 100 served the southern state of Johor alone.[2]

Reports from Malaysian media and the addiction counselling centre are limited but promise to reveal a different picture as seen from across the border. In an attempt to shift the analytical perspective from Singapore to Malaysia, we took two of these buses as the start of an ethnography of crossborder extraction – one to Batu Pahat and the other to Skudai. Some potentially meaningful observations are:

Segmentation: Connections between Malaysia and RWS are composed of several segments. Passengers often board a different bus (operated by a different company) once they cross the customs to the other country. Sometimes, new passengers (let’s call them “transients”) board the bus at one of the customs for a small fee of $1 to cross the causeway to the next customs. As such, the entire connection between RWS and cities in Malaysia is composed of overlapping services, where the space of the customs serves as a kind of switchboard, feeding passengers from one network to another.
Working-class mobility: While the coaches are generally spacious, the experience of crossing the two customs, of re-alighting, waiting, and re-boarding, and the crowding due to transients makes this entire passage tiresome (Fig. 3). This is not the direct and seamless connection of VIP gamblers, but the fitful journey of the “grind market” whose worth is immediately discounted by 60% due to the currency difference between Singapore and Malaysia.
Informality – While the bus route in Singapore moves according to a fixed itinerary of stops, the Malaysian segment is much more fluid and ambiguous. For example, the bus that travelled to Batu Pahat from the Johore CIQ also stopped at three intermediate stops to pick up a small number of passengers. These stops are not immediately recognisable – it could be at a dilapidated bus stop by a small road, or next to a bridge (Fig. 4). However, passengers always knew where these stops are, as they waited there for the bus, or stood up to prepare to alight. In one incident, the bus driver asked us where our hotel was, and took a detour to bring us closer to hotel for no extra charge.

Fig. 3: Waiting for the bus at Johore CIQ

fFg. 4: One of the stops enroute to Batu Pahat